Dee Valley Water shareholders are being urged not to be put off after legalistic letters were sent out regarding the proposed takeover of the firm by Severn Trent.

Plaid Cymru’s North Wales AM Llyr Gruffydd, who is campaigning for the company to remain independent, said: “I’ve been approached by people who have become Dee Valley Water shareholders – a combination of company employees, customers and local people who want to maintain the company’s independence.

“They have shown me this letter and expressed concern that it is intimidating and may persuade some small shareholders to stay away from Thursday’s Extraordinary General Meeting. That meeting is to vote on whether Severn Trent’s offer should be accepted, which would mean Dee Valley Water being taken over and merged into the bigger company.

“The people who contacted me believe the stakes must be high if shareholders have been sent this letter from the share administrator, Capita. It’s full of legal jargon, which many people will find frightening and gives just 48 hours to respond.

“The threat of legal action if the deadline is missed could mean that people do not respond and therefore their votes will be void on the day.  It’s vital that small shareholders turn up on Thursday and are not frightened of exercising their democratic right to vote.”

The letter, from Capita Investor Relations, has been sent to shareholders just days before the EGM this Thursday at The Ramada hotel in Wrexham. The meeting starts at 9.30am and campaigners who support Dee Valley Water’s independence plan to rally outside the hotel. 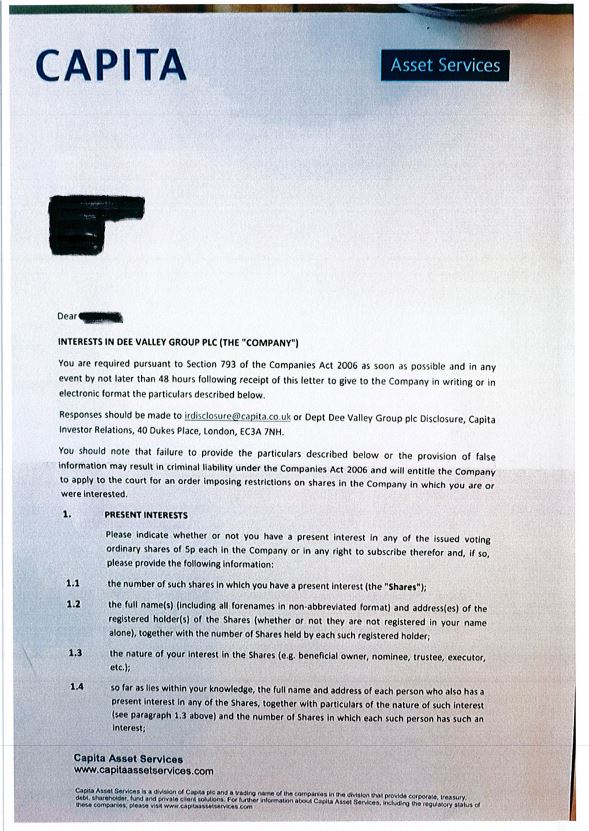