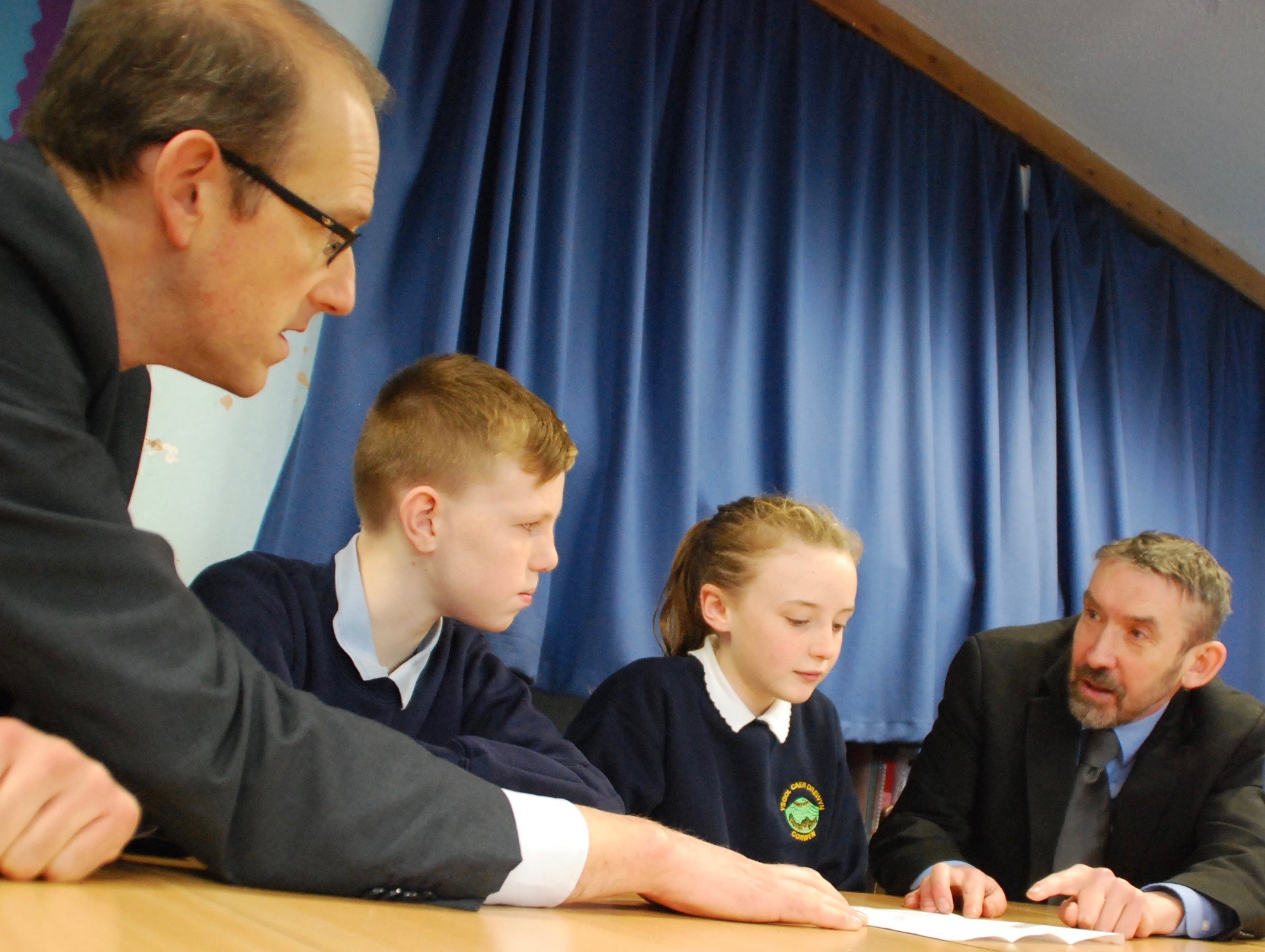 Plaid Cymru’s North Wales AM has given his backing to a campaign by two young “super ambassadors” based at Ysgol Caer Drewyn in Corwen.

Cerys Howell and Evan Parry, who were appointed “super ambassadors” by the Children’s Commissioner in Wales last year, are campaigning to get a mobile dentistry unit back up and running. The mobile dentistry unit, which visits schools in deprived areas across Gwynedd, Denbighshire and Wrexham, was recently condemned and taken out of service. The loss of service means many children would face long journeys to Wrexham or Ruthin for dental check-ups and the two champions felt that was damaging to their health.

As part of their campaign they contacted Llyr Gruffydd, Plaid Cymru’s North Wales AM, who went to the school to meet the campaigning duo.

Llyr Gruffydd AM said, “The mobile dental unit provides a vital service. It gives children regular check-ups and ensures that those who need treatment receives it. I’m calling on the Health Board and the Welsh Government to ensure that money is made available to buy a new vehicle as soon as possible so that the children’s oral health does not suffer.”

According to statistics given to Llyr Gruffydd by Betsi Cadwaladr Health Board the unit served 4,000 children in 2016, of which 500 needed treatment.

Mr Gruffydd added: “The figures show how important this unit is to the children it serves – it’s often the only access they have to a dentist. 41% of children across the UK have evidence of tooth decay, with rates higher for those in deprived populations. It is also the most common single reason why children aged five to nine require admission to hospital. Therefore providing a new mobile dental unit will save the Health Board significant sums in the long term. It’s an investment in our future and failing to make that investment would be letting down a whole generation of kids.

“I have to say that I’m hugely impressed with the work these two super ambassadors have put in to raise this matter. They are arguing, quite rightly, that they have a right to be heard on this important matter of health and that they have the right to grow up as healthily as possible.”

The local Plaid Cymru councillor for Corwen Huw Jones joined Mr Gruffydd on his school visit: “It’s great to see the children taking the initiative in this way. They’re a great credit to the school and the local community. I’ll be doing all I can and working with Llyr, Cerys and Evan to make sure we get this mobile unit back on the road.”