New dialysis unit will be run by private sector

Labour’s commitment to the NHS in Wales has been questioned after it emerged that a new dialysis unit in north Wales will be run and staffed by a private firm.

Plaid Cymru’s North Wales AM Llyr Gruffydd said: “Last year, the Labour Government in Cardiff was preparing to transfer skilled dialysis staff in Wrexham and Welshpool from the NHS to a private provider. Protests by nurses and Plaid Cymru forced the government to review their decision. Now, almost a year later than expected, existing staff will remain with the NHS but a new dialysis unit in Mold, Flintshire, is going to be built, equipped and staffed by a private firm.

“It’s not the first – in the Betsi Cadwaladr region both Bangor and Alltwen dialysis units are already run by private companies and it was only a concerted campaign by trade unions, staff and Plaid Cymru AMs that prevented nursing staff in Welshpool and Wrexham from being transferred from the NHS to private employers.

“This is the creeping privatisation of our NHS that Labour rails against in England but is complicit with in Wales. Nursing staff have told me that they fear for their terms and conditions if private companies continue to expand into this highly specialised field. Is this the ‘21st Century Socialism’ that Mark Drakeford proclaimed when he became First Minister? Aneurin Bevan, founder of the NHS, will be turning in his grave at seeing his creation being undermined by his own party. Does Corbyn support Labour’s privatisation of the NHS in Wales? Wales deserves so much better than this.

Here, and below, is an extract of the announcement by BCUHB.

After working closely with our patients, staff, Commissioners and the Welsh Government, we are now satisfied that the highest quality and best value service delivery option to ensure provision of a safe, sustainable and affordable model of renal dialysis services for our communities across North Wales, will be to: 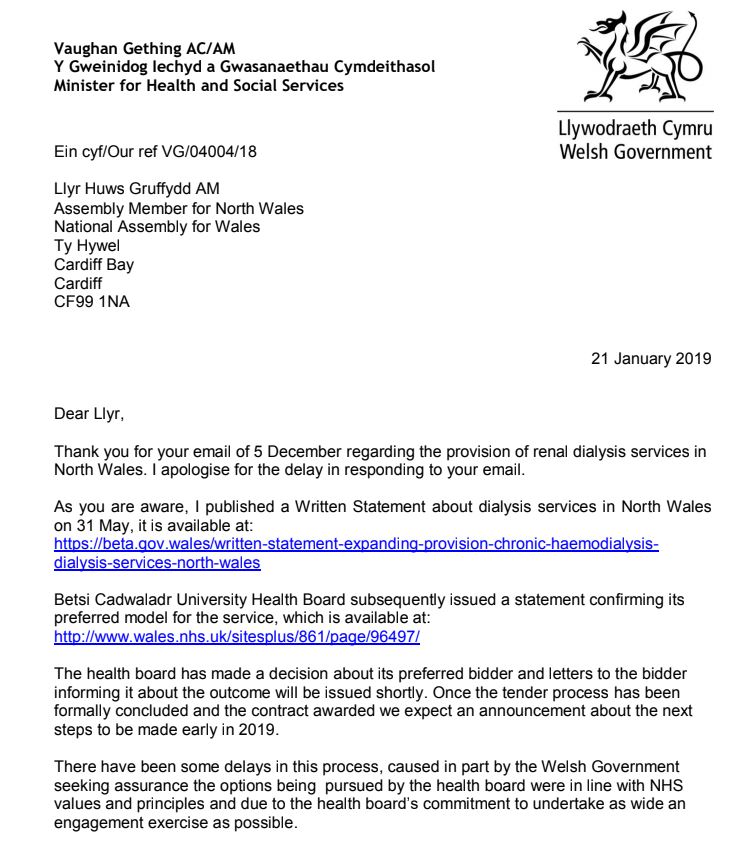